9 Most Daring Dresses That Have Been Worn to ACM Awards

Academy of Country Music Awards(ACM Awards) was the first country music awards program held by a major organization. It was first initiated in 1966 to honor the accomplishments in the industry during the previous year. The awards were first televised in 1972 on American Broadcasting Company(ABC). It features several awards that recognize male and female singers, vocalists, songs, and musicians. This event usually occurs in the month of April or May. “Artist of the Decade” and “Entertainer of the Year” are two of the most prestigious awards. Celebrities also get a chance to flaunt their ACM Awards red carpet looks.

During the event, you can find several celebrities flaunting beautiful and stunning outfits effortlessly. Some would opt for bold and most daring dresses. Our list contains the most daring red carpet dresses of all time. Also, find Hollywood’s best red carpet fashion designers. In this article, you will find 8 most daring Academy of Country Music Awards Red Carpet looks. 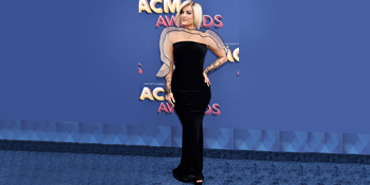 She flaunted a Yanina Couture dress in the 2018 ACM Awards. She always wants to try outfits that are unique and bold. The rich black silhouette was decorated with ruffles and sheer embellished sleeves. Her Jewels was by Dana Rebecca Designs and EFFY Jewelry. Her complete outfit looked stunning and she exhibited it beautifully. 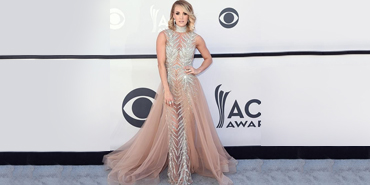 Carrie Underwood does not forget to surprise us with daring ACM dresses in all the events she attends. For the 2017 Academy of Country Music Awards, she wore a stunning LaBourjoisie dress. The ethereal light peach tulle with dazzling silver embellishments and the dramatic high collar looked extremely stunning on her. 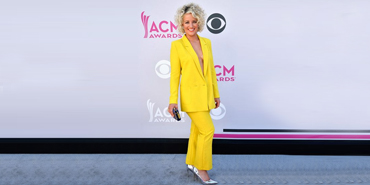 Cam surprised everyone with radiant yellow TOPSHOP co-ord two-piece with flared leg trousers. She went bold and came up with a braless look with only her jacket on. She looked stunning with her signature curls, HUEB earrings, and a yellow clutch. Her Sam Edelman silver metallic pumps added extra oomph to the entire outfit. 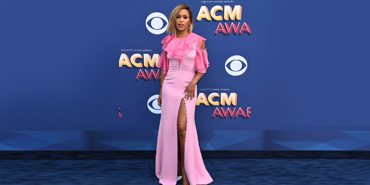 This is one of the stunning country music awards dresses of all time. Eve stunned her fans with her bubblegum pink Parebel Gurung off-the shoulder dress that features a thigh-high slit in her 2018 ACM Awards. The one thing that added more beauty to the outfit was the ruffled collar, silver hoops, and white pointy-toed pumps! 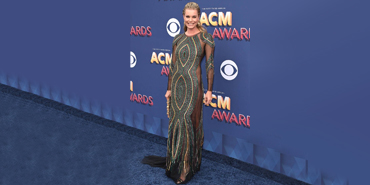 While attending ACM 2019, Rebecca Romijn flaunted a stunning peacock-like Uel Camilo gown. She showed-off her glittering beaded dress with sheer sides effortlessly. Her mesh back dress stunned everyone as she flaunted it with her husband Jerry. She attended the event to present the Male Vocalist of the Year Award to Chris Stapleton. 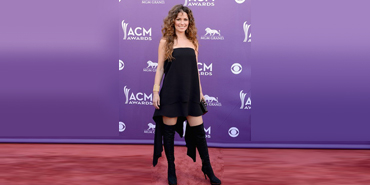 We all know that Shania Twain can flaunt any outfit with her bomb figure. In the 2013 ACM Awards, she wore a stunning black bandeau number that featured two layers falling from her upper thighs and the longer material falling from the sides to her ankles. The one thing that added more drama to the outfit is her staggering thigh high boots. Her loose waves, gold cuff, and drop earrings completed her look. 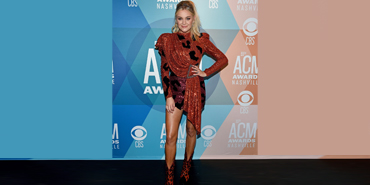 She flaunted the Raisa Vanessa Leopard number on the night of the event. Wearing the stunning sequin dress that featured sculptural shoulder pads, the long sleeves, and draped sash, she took over the stage to sing “Hole in the Bottle”. She completed the look with Western boots. She is also nominated for the ACM Awards Female Artist of the Year. 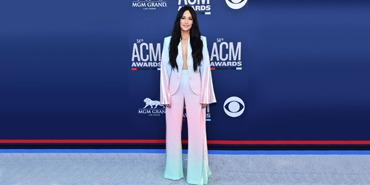 She opted for a style that is one of the most daring red carpet dresses of all time. For the 2019 ACM Awards, Kacey Musgraves opted for a sensual pastel suit. Her outfit featured several pastel colors including green, pink, and purple. Her jacket and pants featured bell sleeves and she completed her look with pretty pink shoes. She went for a bold braless look this time and flaunted like a boss. She has a bid for Best Album of the Year, Song of the Year, and Best Female Artist of the Year. 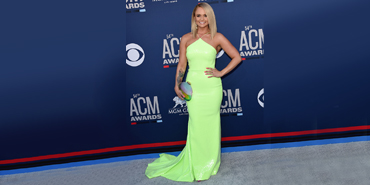 Miranda opted for a daring dress at ACM awards in 2019. She has become one such celebrity who gives some serious outfit goals. Miranda flaunted a ravishing neon green, shimmery latex-like dress. Her halter dress, remarkable clutch, and stunning purple pointy shoes took her red carpet look to a whole new level. She arrived on the red carpet with her husband Brendan McLoughlin who wore a simple black black suit complimenting her outfit.