Fungi are considered nature’s primary recyclers. Their major function is to produce enzymes that help in the degradation of organic matter. But many say that they might also be the future of packaging and building materials. Let’s discuss everything you need to know about how mushroom buildings can be future living!

Mushrooms develop extremely thin thread-like white filaments called mycelium. They grow in all directions forming a complex web. Using Mycelium as a building material is recommended by researchers as it behaves like glue, cementing and transforming the substrate into a solid block. The substrate can be made of sawdust, groundwood, agricultural residues, or any other materials. Mushrooms are eco-friendly and completely sustainable. They are also used in creating multiple products in clothing, furniture, etc.

The final product produced depends on the mycelium strain and the substrate used. The end product can be molded to produce furniture, fabrics, and even mushroom blocks for buildings, because of their good thermal and acoustic characteristics and strong fire behavior. Though these are often compared with expanded polystyrene, mycelium-based materials have improved levels of biodegradability. The fungus species selected and their growth majorly affects the characteristics of a mycelium-based biocomposite.

Where Is the Shell Mycelium Pavilion Located?

Ecovative Design launched a line of healthy, bio-fabricated furniture made with the company’s MycoBoard technology at the Greenbuild Expo 2016.  The co-founder and CEO of the Ecovative says “We envision a future where everything for the home-and office-is grown” He also mentioned that the exterior walls, the floors, cabinets, chairs, table or all of the components that are traditionally constructed with standard engineered wood containing formaldehyde and other toxic resins, can now be cultivated in their facilities using sustainable, grown products.

What Does Ecovative Design Do?

Ecovative Design is one of the top companies to produce mycelium-based products today. They use this material to create objects such as packaging.

Large companies such as IKEA and DELL have started using these biodegradable packages. 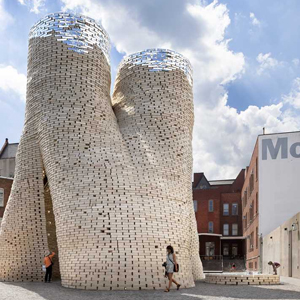 This project is commissioned by the Museum of Modern Art and MoMA PS1. In the Hy-Fi project, The Living studio in New York and Ecovative Design worked cooperatively. Hy-Fi is a 12m high circular tower that was built using around 10,000 mushroom bricks.

What are mycelium bricks? These bricks grew in less than a week in prismatic molds with no added energy from the residue of chopped corn stalks and mushroom mycelium. The mycelium bricks were developed with ARUP’s structural advice. Using mushroom blocks for building can be cost-effective, lightweight, and sustainable.

Once the exhibition ended after two months, the tower of dismantled and the bricks were decomposed to compost. The resulting soil is used by local community gardens.

This mushroom structure architecture is an extension of the natural Carbon Cycle that is made of construction material that grows out of living materials. The structure is 100% grown and 100% compostable. 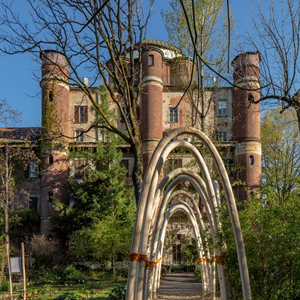 Carlo Ratti Associati and energy company Eni worked in collaboration, developed an architectural structure made of mushrooms called “Circular Garden”. This was revealed at Milan Design Week. It is basically a series of arches composed of one-kilometer mycelium. There were 60 four-meter-tall arches that looked similar to the form used in Antoni Gaudí’s work. With the help of mycology researchers at the Krown bio lab in the Netherlands, the spores in it were injected into organic material to start the growth process. 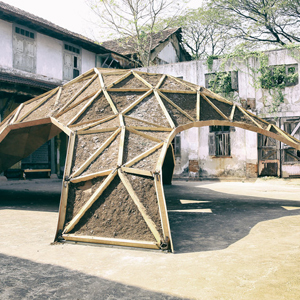 This mycelium mushroom architecture was made in collaboration between BEETLES 3.3 and Yassin Areddia Designs. You can find it in the southwest part of India. A series of tray-like cavities were created in the structure and were filled with fungus. It was then covered over with coir pith(consists of coconut husk fibers). The top layers slowly dry up and die forming a protective shell on top of the mycelium.

More than technical infrastructures, these mycelium brick buildings can form a better future for a sustainable human living!

Rare Facts About the Oldest City in the World