What Are the Worst Pandemics in History?

“Pandemic,” & “Outbreak” are relative words. A modern outbreak involves the worst viruses that kill a hundred thousand or infects food or leaves people sick. In the modern era, outbreaks are constant thought most of them do not reach the pandemic level as the coronavirus. However, a look back into the history of outbreaks is so expansive, deadly that they changed the course of history forever. Cholera, smallpox, bubonic plague, HIV, are few of the most brutal killers in human history. The outbreak of these worst diseases across international borders is properly defined as a pandemic.

Timeline of the Worst Pandemics in History

Diseases have plagued humanity since it’s early day and the spread of these worst diseases increased drastically. While COVID-19 is one of the largest and recent pandemics of the 21st century, you might be wondering to know the worst pandemics in history. 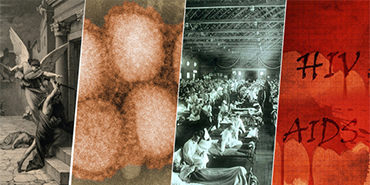 Note: The death toll numbers are the estimates based on research and facts. However, some of the numbers are subject to debate based on new evidence.

Pandemics, epidemic diseases, plague outbreak, virus epidemic, and other diseases have a persistent nature throughout history. There’s one thing that’s consistent – new outbreaks and death rate. Though healthcare improvements and lifestyles are evolving, pandemics have been powerful with their impact every time.

It was an ancient pandemic that affected Egypt, Greece, Asia, and Italy around 165 AD. The true cause of this pandemic is still unknown. The Antonine plague outbreak was brought back to Rome by soldiers who returned from Mesopotamia which killed over 5 million people and collapsed the Roman army.

Caused by Bubonic plague, this pandemic has killed half the Europe’s population. The plague of Justinian was an outbreak that affected people in the Byzantine Empire and Mediterranean port cities. It became one of the first recorded worst plagues in history to have killed a quarter of the population in the Mediterranean city. More than five thousand people died per day resulting in deaths of 40% of the city’s population.

The outbreak lasted from 1346-1353 which killed more than 200 million people. It affected people in Europe, Africa, and Asia. The outbreak was assumed to have originated in Asia and the disease was spread via fleas on the rats. Ports being the major breeding ground for rats and fleas caused devastating effects on all three continents.

Lasted even in the 19th century, Cholera originated in India spreading from the River Ganges Delta. The pandemic affected Asia, Europe, North America, and Africa killing millions of people. British Physician John Snow tracked the cases of cholera and succeeded in identifying the cause. The transmission of the disease was due to contaminated water. However, thousands of people in Great Britain lost their life due to these worst pandemics in history.

It was thought to be an outbreak due to Influenza A virus H2N2 however recent discoveries found that it was caused by one of the worst viruses H3N8. The first case of Russian Flu/Asiatic Flu was observed in May 1889 in Bukhara, Athabasca, and Greenland. Population growth in the 19th century helped the flu spread across the globe. It was considered to be the first true epidemic in the era of bacteriology which claimed the lives of over a million.

One of the worst plagues in history, Spanish Flu affected over a third of the world population ending the lives of 50 million people and infecting 500 million people. While the other pandemics only killed the elderly and weakened patients, Spanish Flu struck healthy people especially young adults. Children, elders, and people with weaker immune systems were not affected by this worst pandemic disease.

It originated in China and lasted for almost two years. It affected Singapore, Hong Kong, and the United States. the pandemic outbreak of the Influenza virus H2N2 type resulted in the death of over 2 million people across the world.

The Hong Kong Flu was a pandemic outbreak due to H3N2 a genetic offshoot of the H2N2 subtype. The first reported case of Hong Kong flu was on July 13, 1968, and it took nearly 17 days before outbreaks reported in Singapore, Vietnam, Philippines, India, Australia, Europe, and the United States. Though the mortality rate was low compared to the other pandemic outbreaks, Hong Kong flu resulted in the death of 15% of Hong Kong’s population.

The recent pandemic, COVID-19 has left us to think about public health, isolation, quarantine, and social distancing. Looking back, there have been many pandemics and worst diseases in history before and we were constantly fighting and persisting in spite of them. The devastation is real but eventually, humans manage to fight over. After the dark ages of the Black Death, Europe fought back and entered its Renaissance in human history.

For now, let’s support each other, help our families and communities to fight back. It’s certainly won’t last forever. History tells us that we don’t choose what happens to us or what period we are born. We should just prepare and persist.

What Are the Worst Pandemics in History? ANSWER NOW
Recent Posts